The Company was initially established in 1946 as a tender department of Mohamed Ebrahim and Company (Pvt) Ltd. (“MECO”).

In October 1982 MISL expanded to assume an independent identity of its own and was then incorporated as a private limited company. Today, MISL is the leader in its field.

Sharing the Joy The greatest compassion is the prevention of Human suffering though caring and kindness. Supporting those who are doing their jobs sincerely and restlessly, highlights the strength of humanity. 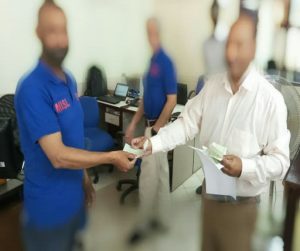 Our office has been shifted, our new address as follows:
S/3 S.I.T.E G.Allana Road Karachi 75730, Adjacent to Masroor base, Pakistan.

MISL was awarded first prize in its category by the Pakistan French Business Alliance (PFBA) on 8th Dec 2009. Chief guests were the  Additional Director General, FIA and the Ambassador of France to Pakistan. MISL was awarded first prize in its category by the Pakistan French Business Alliance (PFBA) on 27 Feb 2009. Chief guests were the former Governor of the State Bank of Pakistan and the Ambassador of France to Pakistan. The awards ceremony took place on 7 September 2007 at the Karachi Marriott Hotel. Present at the ceremony were the Ambassador of France to Pakistan, His Excellency Mr. Regis de Belenet. Ms. Kashmala Tariq, a parliamentarian from Pakistan’s National Assembly was the Guest of Honor. Images used in this webpage: © Sales force-image or MISL-images google/images | Webpage content: © MISL |We are working to provide all necessary information to our customers accurately,  it may be subject to change at any time without prior notice.